I had never heard of this math practice product before, so I was really curious when we got to review an online Smartick subscription by Smartick.

Smartick is an online subscription-based program that allows students ages 4-14 to practice their math skills.  The program is intuitive, so after an initial placement period, the program begins at a starting point just below your student’s current level of understanding.  Then practice problems are provided, and the program adjusts automatically as your student progresses through each concept.

Parents can monitor student progress and performance through the parent dashboard.  In addition, you can opt to receive daily emails that let your know your child has completed their work for the day and also gives you a detailed breakdown of the topics covered, how your student scored, and how quickly they responded.  It notifies you if your student is performing satisfactorily, if their work is improvable, or if their responses times are too slow.  You can also receive a weekly summary.

The parent dashboard also includes the option to leave an encouraging message for your student or to set up a rewards system of your own design.

The program can be accessed via the website or via a convenient app for Apple or Android.  Both require online access so that progress can be stored interchangeably in both platforms, providing you with the flexibility to use either platform at any time.

You can read about the methodology and how the program compares to another popular program or sign up for a free trial to see if the program is right for you.

Holden is 11 and has ADHD.  His attention span is short if the delivery is not stimulating.  So anytime we can practice math skills in a colorful and engaging online format, I’m willing to give it a try.  Holden has a pretty good general understanding of math, but he struggles with retaining the methodology over time.  Therefore, I find myself reteaching and reminding him quite often.  That’s why although he was 2 years ahead in math, we’ve thrown on the brakes this year so we can focus on the basics and retention of information before moving on to Pre-Algebra concepts.  Also, because he refuses to write any math problems down, his response time is very slow, and this turns math into a lengthy chore for him, which is greatly affected by his lack of attention span.  It’s a vicious cycle.  So when we received Smartick for review, I was excited at the prospect of giving him the extra reinforcement and practice that he needed in a format that he actually liked.

Smartick is intended to be used in 15-minute intervals about 4-5 days a week for maximum effectiveness.  That short time commitment makes this a good fit for Holden right off the bat.  He also enjoys the portability of using the app version on our school tablet, which he can take outside and use while lounging in the hammock, for instance.  This makes it feel less like school work, so that’s a big bonus for him.

In the beginning, the program was assessing his current level.  The parent indicates the grade level of the child at signup, and the program starts with problems below that level and adjusts up as appropriate.  Once it determines a starting point, it notifies the parent that placement has been made and what the student will begin working on first.  This is great when you’re trying to fill in learning gaps, because the program will pick up on those and ensure that your child starts where they really are, regardless of age or grade level.  The very first message I received reiterated that parents should NOT be helping their student complete the work, as that will affect the direction of the program, which picks up on the student’s needs automatically.  I”m so used to helping him and answering questions, and he’s so used to asking me that it worked out better if I got him started and left the room so he could complete it on his own. 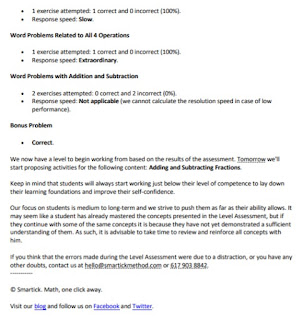 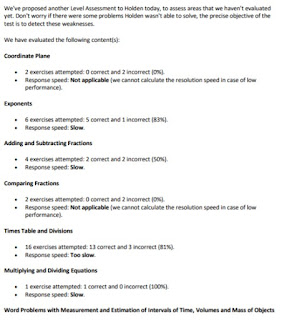 I love the daily emails that let me know he has done his work for the day and give me a detailed summary of how he performed in specific content areas, as well as whether or not his response time was too slow.  Slow response time continues to be an issue for him, as I expected it would be.  But I’ve begun to see improvements in this area over the course of the review.  Yay, Smartick! 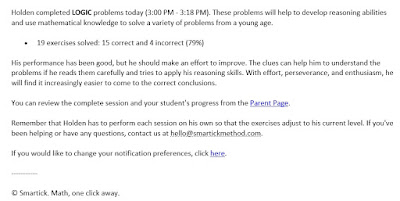 In addition, I can go onto the website and log into the parent dashboard to view his progress details as well as his individual session details. 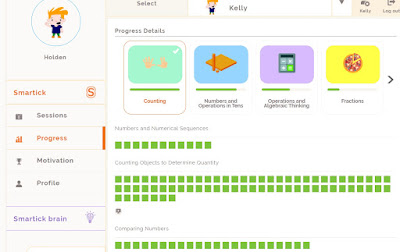 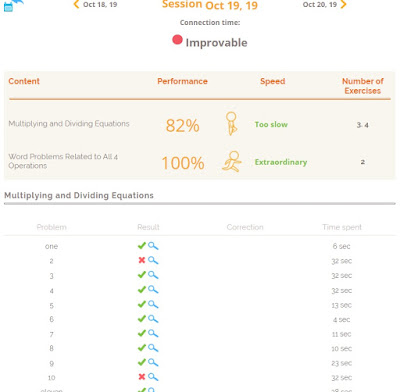 Holden loves that in addition to the regular sessions, there are some fun skill-building games that he can play in the Smart Brain section, and he chooses to do these on his own, which impresses me.  He’s particularly fond of the Simon game, which improves memory. 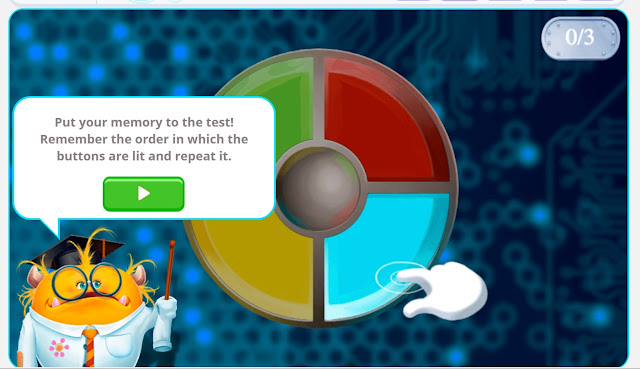 I counted about 27 games in all!  They are broken down into categories for memory, reasoning, attention, and flexibility.  He apparently never noticed the clickable tabs that take you to the games in each category, so he has only played the memory games so far.  Now that I’ve showed him how to find them, he is excited to try out the others as soon as possible! 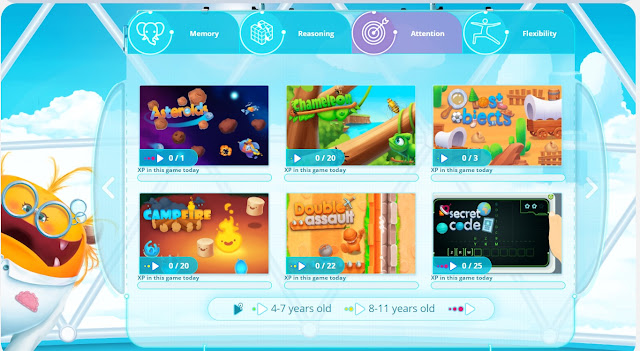 A colorful game environment keeps Holden’s attention better than anything else, so knowing that he can play these after his regular session is a great motivator for him.

Today, Holden will be working on coordinate planes.  Here’s an example of what the questions look like in his daily sessions. 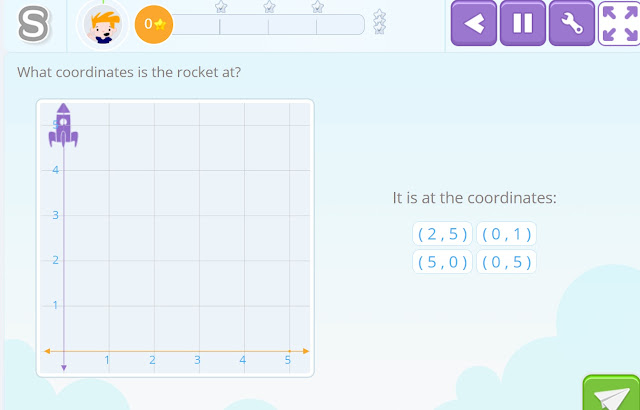 So far, he’s really been enjoying it, and getting him to complete his sessions has not been difficult.  After thoroughly reviewing the parent dashboard, however, I’ve been unable to determine whether or not the program thinks he is performing at his grade level or not.  Nowhere that I’ve seen indicates what his current performance grade level actually is.  This is information that I’d really like to know so I can assess where were should be working in our regular math lessons for school.

Overall, I love this program, because it is an effective way to work on gaps in math learning.  It’s not parent-intensive, Holden appreciates the immediate feedback, it doesn’t require a big time commitment, and it has a fun and engaging format that makes it attractive for my son.  Any time we can get in extra math practice and it not feel like a chore is a win-win for us!

Check out what other Crew members have to say about Smartick by clicking the banner below.

Posted by Kelly Burgess at 2:43 PM 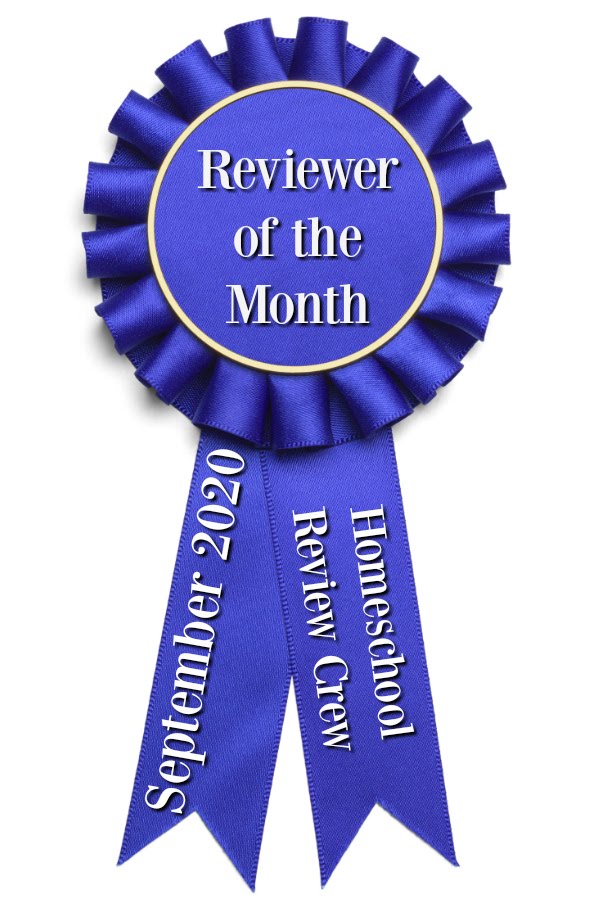