We’ve finally made it to the final installment of restaurant birthday clubs where you can sign up for a treat for your birthday.  I told you last week that this final list would be a bit longer, so I hope you’re all caught up! 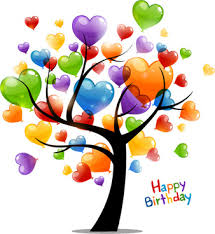 I hope you’ve enjoyed this series!  Let me in the comments if you’d like to see more handy lists like this in the future.  And if you have another birthday club you’d like to add, please feel free to share!

Thanks for tuning in.  Enjoy your haul!

Posted by Kelly Burgess at 3:19 PM No comments:

Have you been keeping up with your weekly signup list?  It’s less time consuming if you just take a few minutes to do this short list of six birthday clubs each week.  Only one more list to go, and the last one will be a bit longer, so don’t let yourself get behind!!

Jack in the Box

Posted by Kelly Burgess at 2:36 PM No comments:

Hello, everyone!  Are you ready for the second installment of restaurant freebies you can get for your birthday?

Use the links below to join these birthday clubs, and be prepared to collect the yummy deliciousness when your special day comes around!

A&W Restaurants (click on Mug Club Signup at the top)

Posted by Kelly Burgess at 8:31 PM No comments:

I’m going to start a weekly series for June that focuses on restaurants where you can get something FREE for your birthday!  There are so many birthday clubs out there ready to give you a delectable goody for your special day, but it can be time-consuming to sign up for all of them.  That being said, you also have to be prepared to receive emails or texts from those places throughout the year.  That little caveat, though, could be worth it in the long run if you enjoy special treats to help you celebrate!

So to break up the long list of participating businesses and make it easier for you to sign up, I’m going to post a series of signup links in short groups to make it more manageable for you. That way, you won’t have to devote an entire evening to the process as I did!

So without further ado, here is your first installment!  And please note than many places allow you to sign up if you are 13 or over (not just adults like it used to be), so your teens may benefit from some of these, too, if they want to use a separate email or cell number for text messages.  Enjoy!

Posted by Kelly Burgess at 9:05 AM No comments:

Having reviewed the first book in this series a few years ago, we were really looking forward to reviewing New American Cursive 2 (Famous Americans) by Memoria Press!

The New American Cursive series is a really unique penmanship program.  It eliminates 26 unnecessary strokes from traditional cursive, making it simpler for children to learn, while still retaining the beautiful overall appearance of cursive handwriting. These penmanship books are spiral-bound from the top, making them ideal for both left- and right-handed students.

New American Cursive 2 is available in two editions: Famous Americans or Scripture.  Famous Americans is the edition we chose this time around, and it includes quotations from key figures in American history and literature, such as George Washington and Ralph Waldo Emerson.

This workbook contains an 8-page teaching guide, 125 instruction exercises, and 3 evaluations, plus reproducible journal pages with different line sizes and a reproducible evaluation checklist.  You can purchase it for just $22.95!

When Holden was first learning cursive, it was an absolute nightmare for both of us!  He is my only left-handed child, and he also lacked the fine motor skills that his siblings had at the same age.  Writing has always been frustrating for him, and he even began printing later than they did.  He would literally spend an hour in front of a cursive handwriting page crying.  I was just about to give up when Memoria Press came out with New American Cursive, and we decided to review the first book and see if it would work any better than the other things we’d tried.  Boy, was I in for a surprise!

Holden immediately took to it, and he proudly completed the entire book that school year!  He actually liked it!  He has ADHD, and one of the things the program recommended was that he listen to classical mus ic while completing his pages.  He got so he looked forward to it, and if I forgot to turn on the music, he was sure to remind me!  It really helped him to be calm and focus on what he was doing.  He had great success that year, and it’s all because of this program!  They even had online videos with tips for helping left-handed students, and that helped a lot, too, with proper positioning of the paper and his hand.  The spiral top-binding of the workbook was also key to keep the binding out of the way of his left hand.  I never thought about things like that before, but all of it was hindering his ability to write properly.  I was really thankful to have found this program!

I hesitated to move on to the next book, though, because there seems to be a huge jump between the difficulty level of the first book and the second book.  They also allow you to purchase the New American Cursive font for the Startwrite handwriting software, which we already owned, so I made my own worksheets using that for a while.  (You can also purchase the software from them.)  But now that he is entering 5th grade and has really built up some confidence with cursive handwriting, I decided this was the right time to try out book 2.

I have to say that again, I’m really impressed with this program!  First of all, he was ecstatic to be moving back to this program.  We did something else this last year, and he really missed this font style!  Now that he is better able to stay in the lines and is able to write more legibly, he was better able to try out the smaller lines in Book 2.  We found the lessons to have a lot of variety, which he really enjoyed.  A lot of handwriting books can be very repetitive in their assignments, where students have to anticipate the same style of worksheets day after day, which can really get monotonous.  Not so with this book!

Holden began with a simple review of both upper and lower case letters.  There’s a printed page that illustrates correct letter and number formation for easy reference while doing the lessons.  I laid that out for him each day in case he needed a reminder of how to form the letters.  Then he moved on to a finish-the-sentence exercise about himself.  The next lessons reminded him of proper pencil grip, proper positioning of the paper based on left- or right-handedness, and correct posture as he practiced tracing some letters. 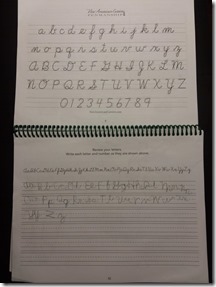 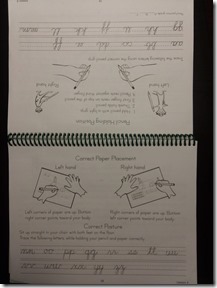 After that, he did a unique lesson where he had to see if he could read cursive writing, and he highlighted any letters that he struggled to read.  I thought that was a great exercise, and it was something he’d never tried to do before.  Initially, he thought he wouldn’t be able to do it.  But I reminded him that he’s been writing in cursive letters for a long time now, so of course he’d be able to recognize them and read the letter!  He was surprised that he really could do it, and he only struggled with a couple of the letters.  I just pointed them out on the lettering master, and we highlighted them as a reminder.  He felt really accomplished after reading that letter! 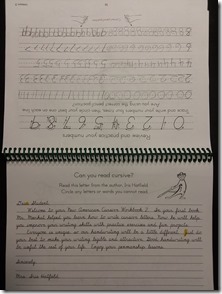 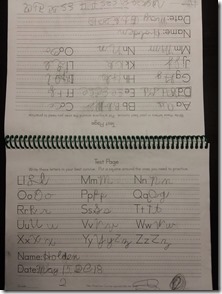 Next, he practiced writing numbers.  He said that was easy!  Then he did his test pages on writing the alphabet.  This workbook encourages students to do self-evaluation of their lettering by marking letters that they think they should practice more.  I had him do that periodically, and he was pretty honest about which ones needed work.

Then the lessons moved on to making different types of lettering connections so words can be formed in cursive.  Finally, he did his first evaluation.  I can’t wait to get to the next evaluation later in the program so we can compare and see how much progress he’s made! 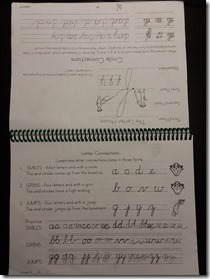 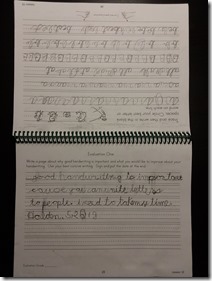 Some of the later activities include those famous quotes by famous Americans, lists of words with related letters to write, writing a story in cursive, writing about various topics and illustrating them, some basic grammar lessons like when to use capital letters and how to address an envelope, using lines that don’t include a top line, and finally, writing on open lines the way you would on traditional notebook paper.

So as you can see, this isn’t simply a handwriting practice book, but it also incorporates grammar and writing both stories and different types of notes.  All the while, the lines get steadily smaller and simpler.  And don’t forget those reproducible journaling pages in the back!  You can incorporate extra practice with those, too!

I am really looking forward to seeing how much Holden’s handwriting improves this year, and I also love how it incorporates some creative writing, as well.  I was hoping to introduce some of that this next year, and now I don’t need a separate program to do that!

I really see so much improvement with Holden using this program, not only in his actual cursive handwriting, but also in his attitude towards doing it.  With New American Cursive, he feels confident that he can be successful, and that makes him feel more positive about doing the work each day.  I can’t recommend this program enough!

Check out what other Crew members have to say about this and other products from Memoria Press by clicking the banner below.

Posted by Kelly Burgess at 8:06 AM No comments:

Kelly Burgess
I'm a homeschooling mom of 3 kids ranging from middle school through adult. I've been happily married for over 25 years, and my husband and I do a semi-weekly podcast called Couple With Chaos!