I saw the *perfect* set of Sterlite drawers for our workboxes. It's what I wish they'd had when I first went shopping for some. Once I saw them, I knew I had to have them, so I went ahead and replaced what I had with these new ones and then used the other drawer sets to reorganize snacks and drinks in my dining room. Anyway, each set of drawers was $20 at 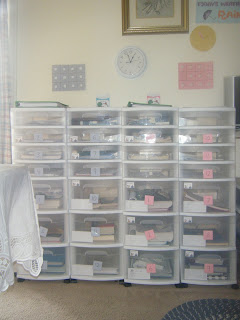 Big Lots, and I got 4 of them. Each set has 7 drawers (3 deep and 4 shallow), and it's all one piece. So they are just the same size as what I had before, except that the smaller sets I had sitting on top weren't as wide. Now all of my teacher's manuals lay flat in the shallow drawers, and I don't have to worry about anybody knocking the smaller sets off the top. The photo at right shows the new setup. Also, Hayden kept losing the post-it notes with the assignments on them that told what pages to read of each book, so I laminated index cards and used Vis-a-Vis wet erase markers to write the assignments on them, and then I taped them inside the drawers so he can see what they say through the drawers and won't need to remove them. We use a 4-day schedule, so I put the whole week's assignments on the card (M-T-W-TH) so I only have to change them on the weekends.

So I really think it looks great, and it's very functional. Now I don't need the return baskets on top. Since each set has 7 drawers instead of 6, each one has an extra drawer on top, so each kid has one as a return drawer for finished work I need to grade, and one as a handy supply drawer for scissors, glue, extra pencils, ruler, etc. I love that it's all contained.

So if you have any comments about it, please share! I would love some feedback.

Incidentally, Big Lots is having a teacher appreciation day next Saturday, August 1st, and I could have gotten an extra 10% off and saved $8, but the kids are having their birthday party that day, and I was afraid I wouldn't ever make it up there since the party often drags on all day (we usually have about 25-30 people in the house!). So I just went ahead and bought them while I had time to get them set up.

I've also been cleaning out the kids' board games. I have been disgusted at how much space they take up, not to mention how they are always losing/misplacing pieces to them, and I find them all over the place. So I had an idea...I went and bought the Hefty One-Zip Jumbo 2.5 gallon storage bags from Target, and I took all the games out of their boxes and put them instead in one of those bags. I cut out the name of the game, any instructions, and the contents list and dropped them into the bag with the game. I organized any small pieces into snack or sandwich sized bags and dropped those in the bigger bag with the game board, as well. I was able to fit nearly all of them in one big storage tub underneath the kids' pool table. I want to make space for them in one of the toy armoires and get rid of the storage tub altogether. I literally filled up both my trash can and my recycle can already! Good thing I'll have trash pickup before the party.

So I'm busy making lists and starting to decorate for their birthday party on Saturday. I called around today and found a cake decorating store that had a handful of cupcake pics with the Italian flag on them. Turns out they were looking to get rid of them and said they's sell me all they have (more than 24) for a grand total of 60 cents! Way cool. I'm waiting for Holden to get up from his nap so we can run and get them. I'd like to find a centerpiece, but I'm not having any luck except for online, and it's too late to get things shipped in time now.

The party is going to be an Italian Cook-Off theme. The kids are all going to get their own white aprons to decorate with fabric markers and take home as party favors. They will be making their own personal pizzas using Boboli crusts. For the grownups, I'm making a full spread of Italian fare, including Bruschetta Stuffed Chicken Breasts, Italian Garden Salad, Fettuccini Alfredo, Spaghetti and Meatballs, sliced Italian bread topped with mild Italian sausage, peppers and onions, and mozzarella baked on it, a fresh fruit tray, snacks, and an Italian Chocolate Cream Cake as the birthday cake. It's supposed to be a large 3-layer cake, but I'm going to bake it as a 1/2 sheet cake instead. I figured for serving so many people, that will be easier to slice up. I'm also doing strawberry cupcakes for Haylee with green and red sugar sprinkled on white frosting and the flag pics on top.

This is going to be such a busy week. I started braiding red, green, and white streamers today and taping them to the corners of the room, meeting at my ceiling fan in the middle. I will probably wait until later in the week to blow up the balloons and hang them. I got great Italian folk music from the library that I'm going to have playing in the background, too. I wanted to find affordable chef hats for the kids to keep, too, but I haven't had any luck.

Well, I've gotta run...I hear thunder, and the Bounce Around is still out in the yard!
Posted by Kelly Burgess at 12:03 PM 5 comments:

Shew! This had been a busy month that has just simply flown by! Our school schedule has been pretty cumbersome these last 3 weeks, so we haven't had time for much else. All the Sonlight forums say that Core 5 has the heaviest workload of all the cores, even for high school, and that the first 2 weeks of it are the heaviest of all. Many people have posted that they take a full 2 weeks to do EACH of the first 2 weeks. But we have managed to trudge our way through at full steam ahead without stretching it out at all. I'm happy to say we are finishing up week 3 now, so hopefully the pace will slow a bit for us now! We're starting to get the hang of the World Book Encyclopedia on DVD-ROM and how to use it for our Eastern Hemisphere Explorer research. 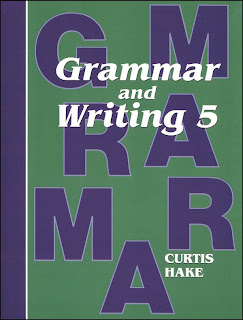 Now I'm taking the plunge and venturing out to try something totally new. We've been using Silver Burdett English for years and have been loving it. I purchased textbook/workbook sets up through 8th grade several years ago and have had them in the cabinet just waiting to be used each year. I love it's straight-forward approach to teaching grammar and the way it eases kids into writing. Hayden has really needed that. But now I'm finding that he's getting very lazy with it, rushing through all the worksheets because each one focuses on one specific grammar rule. He's not really paying attention to what he's actually doing, and that has been bugging me like crazy this year. Then I stumbled onto something on the Saxon Homeschool website. I found out they've just released (May 20th, 2009) a new Saxon Grammar & Writing program for grades 5, 6, 7, and 8. I saw it about a month ago, but there weren't any samples posted yet, and I sure wasn't going to drop that kind of money without seeing the contents first. Then Thursday night, I saw there were rather lengthy 25-page samples for each grade posted on their website. I took a long look at it and was very impressed.

It has the same incremental, spiral-learning approach as Saxon Math, and that was just what I was hoping for! The "mixed practice" that Saxon Math has works wonderfully for Hayden. It helps him retain what he has learned in previous lessons by bringing forth a spattering of questions from across those lessons, and it forces him to pay attention to what he's doing because every question references something completely different. That makes him have to think about what the question is asking. I think that's just what he needs for grammar, too. In looking through the sample, it looks like it is exactly that, and each question on the mixed practice references the lesson number in parentheses that the question came from so he can look back to refresh his memory if he gets stuck.

Hayden does Saxon Math totally independently now, and I'm hoping he will be able to do the grammar program the same way. I'm very excited about it! I talked to Steve about it, and he said it sounded like a good plan, so I went ahead and ordered it. It retails for $75 from Saxon's website plus $10 shipping. But then I did an internet search and found it at http://www.homeschoolingsupply.com/ for $55 + $11 shipping, and I will have it in about a week. There are 112 lessons in it, and that works out to about 3 per week for the whole school year, so we'll have to catch up on about the first 12 lessons once it comes. I think we can do it, though. The homeschool set includes the student textbook, student workbook, and teacher's packet. The textbook covers grammar concepts, the workbook covers writing, and the teacher's packet has the answer key and forms for tracking student progress.

So wish us luck! Hayden has always loved Saxon Math and Saxon Phonics, so I'm hoping he'll really take to this since the format will be so familiar and comfortable for him.

I'm headed out shortly to pick up this month's Angel Food order. They've started sending out neat invitations to order that include photos of all of the food items in the basic box. I have to admit the advertising is very appealing and really helps you visualize what's included so you can figure up in your head if it's a good value for your family or not.

Posted by Kelly Burgess at 7:04 AM No comments:

Kelly Burgess
I'm a homeschooling mom of 3 kids ranging from middle school through adult. I've been happily married for over 25 years, and my husband and I do a semi-weekly podcast called Couple With Chaos!